There are many ways for your brand/company/clients to get involved. Contact us today.

​The year is 2225, the human population has hit 100 billion and the Earth is on the brink. Resources have run dry, temperatures continue to rise and the New World Order is in play, using technology to keep humanity under tight control. The world has been split into Divisions, countries are obsolete, and the masses live in camp-like compounds with limited rights and freedoms. They have been implanted with mind-controlling ‘software’ and are being forced into an AI evolution. Because of the population surge, the powers-that-be are planning a cull, to destroy the majority of the population for the sake of the planet’s survival. However, the masses have other plans. Led by Johnny and Jenny, the ‘Rests’, as they’re called, have to stop the ‘system update’ designed by the ‘Rights’ and evil doctor Ben. This system update will kill anyone who installs it so they need to act fast. In Earth’s final hour, will humanity survive? Or is the World finally ready to POP.

Interested in supporting *POP* as a private or CORPORATE SPONSOR?

Taking cues from Meatloaf’s ‘Bat Out of Hell’, Abba’s ‘Mamma Mia’ and Queen’s ‘We Will Rock You’, the legendary music of Men Without Hats tells a story that begs to play out on stage. With the continued success of these now famous stage musical hits, Huge Picture sees a unique opportunity to showcase a world-renowned Canadian pop band, alongside our original story.

​With consent from Men Without Hats and their management, Huge Picture has initiated a stage concept that fuses the best in 80’s dance-pop with a futuristic dystopian tale, curating all the components of a classic.

*POP* An Apocalyptic Parody - with music by MEN WITHOUT HATS

Huge Picture is aiming to bring *POP – An Apocalyptic Parody, with music by Men Without Hats* into full production! We are securing partnerships, corporate sponsors and private investors to raise the funds needed to present *POP* to Toronto audiences for its first preview run. From there, we hope it gains momentum to maintain a longer Toronto run and go on to be produced for audiences and fans coast to coast.

We are developing this as a technologically groundbreaking stage-spectacular, using advanced visual effect techniques, fueled with high tempo dance numbers. *POP* will be a nostalgic stage delight that delivers a message of conservation and the human connection. Something the planet and humanity needs right now.

A few behind-the-scene photos from our ​*POP* treatment shoot:

Be the first to know when tickets go on sale!

It’s a musical with a social message, told through intense up-tempo choreography and advanced visual effect treatments - this stage experience will move the audience in more ways than one. A dire warning of what could come, told with a jazz-hand flair.

​– where music moves and rhythm rules” 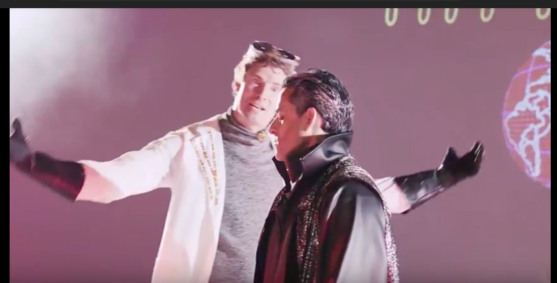